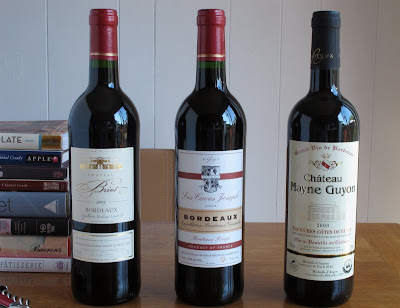 These Bordeaux wines have been my top choice for my home dinner recently. Bordeaux wines are normally blended with a few different grapes such as Cabernet Sauvignon, Merlot, Cabernet Franc and Petit Verdot. Bordeaux, France is one of the most highly-regarded wine regions in the world, and many wineries (chateaux) produce excellent, but also very expensive, wine. However these wines are everyday drinking wine that all under $10 and you can buy them at Trader Joe's (they have  many great and affordable wine selection)... often by the case rather than by the bottle! 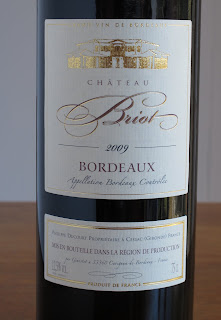 2009 Chateau Briot ($4.99) is light and smooth, and can go with any food. For more feedback on this wine... well, you need to get one and find out. It is blended with Cabernet Sauvignon (40%), Merlot (34%) and Cabernet Franc (26%). Note: pricey/luxury Bordeaux wines normally contain more of either Cabernet Sauvignon or Merlot grapes. 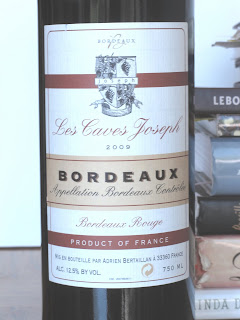 2009 Les Caves Joseph ($4.99) is blended with Merlot (60%) and Cabernet Sauvignon (40%). It is definitely bolder and rounder than Chateau Briot. It pairs well with roasted or grilled meat or chicken... an all-around great wine for summer BBQ. 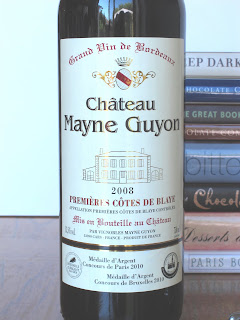 2008 Chateau Mayne Guyon ($6.99):  I love this wine and have been buying it at Trader Joe's for the past 5 years. It's got a quality, fruity aroma and bold taste of berries and black cherry -- very typical style of Bordeaux red wine, but not easy to find at only $6.99.
I would like to post more about good, affordable and interesting wine in coming week. Meanwhile please check out my wine information web site: www.wineloverscellar.net ....if you are interested in more about wine, and feel free give me your comment. Thanks,
Posted by The Palate Post at 4:57 PM No comments: 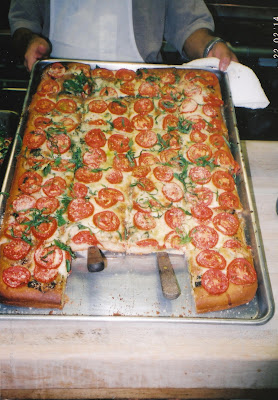 Focaccia, Italian flat bread. It's a very popular lunch item in our kitchen. I normally make it more like pizza -- with a lot of toppings. This one is with fresh Mozzarella cheese, oven roasted fresh Roma tomatoes and fresh basil. 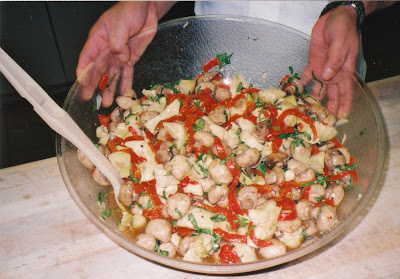 This is a side dish I often make for Italian lunch served with Pizza or Pasta dishes.
Fresh small mozzarella balls (﻿Ciliegine), blanched mushrooms and roasted red bell peppers dressed with extra-virgin olive oil, lemon juice and a little balsamic vinegar. Some people like this as a topping on their garden green salad. 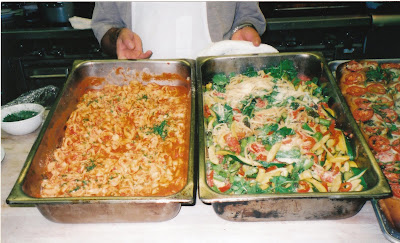 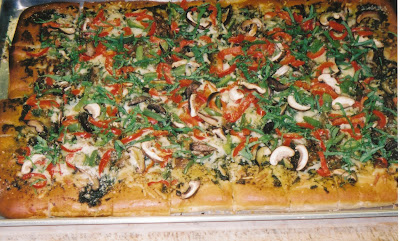 Focaccia Bread with roasted garlic, caramelized onion, mushroom and fresh basil.
Posted by The Palate Post at 5:38 PM No comments:

Friday April 18, 2008 Last update: 12:36 AM PDT
April 18, 2008
By Theo Polan
For centuries, with a few notable exceptions like Abraham Lincoln, facial hair has been all but synonymous with barbarians and homeless people. Neither of these groups is usually associated with particularly good food. However, there is one place where great food and facial hair go together brilliantly: the dining room of Sigma Alpha Epsilon. When dining at this fine establishment, some portion of the clientele is almost guaranteed to be exhibiting facial hair. In fact, other kinds of hair are available as well. On a hot day, for example, your meal might be complemented by visible chest hair.
Every week, Chef Ko and his mustached accomplice, Sal, cook up exciting menus fit for consumption by the men who will clearly be the leaders of our nation as soon as they get a chance to shave (and recover from last weekend’s hangover). One recent dinner featured a preparation of mahi-mahi, crispy and spicy on the outside, yet moist and flavorful inside. This excellent dish exhibited the Cajun flair that might be provided by Emeril Lagasse, combined with a bit of a tropical twist that might be inspired by Roy Yamaguchi. The mahi-mahi was accompanied by crispy fried shrimp, chewy calamari and mushroom risotto.
Twenty-four hours later, it was time to move from surf to turf with generous servings of steak fresh off the outdoor charcoal grill, served with potatoes and other veggies. Perhaps the quality was slightly short of Peter Luger’s or Spark’s (although unlike Spark’s, SAE has not been the scene of any notable mob hits in recent memory), but it is a far cry from any mystery meat that might be served in the dining halls.

Sometimes Ko decides that the previous offerings have been lacking. That’s when it’s time for an appearance by a guest chef. Last week a sushi chef arrived to help churn out more maki, sushi and sashimi than the whole house could manage to eat. And once again, this was nothing like the express sushi available from Stanford Dining, which might contain anything from old fish to recycled tire rubber. Instead, the chef handcrafted fresh fish with rice and seaweed just moments before consumption.
Lunch has been known to feature a variety of gourmet selections including macaroni with cheese, cold-cut sandwiches and pizza that sometimes seems to have been inspired by corrugated cardboard. While the beverage selection is rather typical of any Row house or dining hall, the SAE kitchen does offer its own twist on serving that is both elegant and unique. Due to the lack of real cups, a popular option is to employ a reused red cup from last weekend’s party. For a more upscale experience, you might chose to discreetly wait around the Hobart in hopes of getting your hands on one of the much sought-after non-disposable cups which may or may not have been stolen from a cheap diner. And finally, there is the ever-classy option to drink out of a bowl.
If you’re really demanding, perhaps this high-end dining experience isn’t enough for you and you also demand entertainment with your meal. In that case, come by SAE in the late spring or early fall when it becomes a sort of cabaret-style comedy club featuring the ever-so-funny pledges who are liable to be called on for the performance of a joke at any moment. Topics of pledge jokes have ranged from [deleted in editing] to [deleted in editing].
And best of all, eating at SAE is cheap. Based on the quarterly board rate, each meal comes out to $10.95. Mahi-mahi, shrimp, calamari for under $11? Even a bearded barbarian wouldn’t be able to turn that offer down.
Posted by The Palate Post at 9:32 PM No comments: