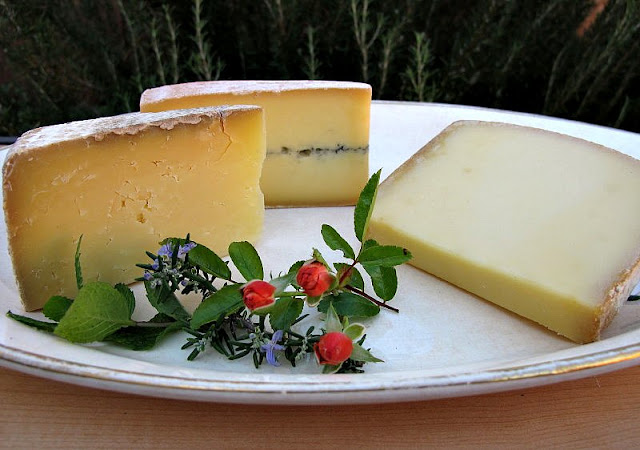 These cheeses are all semi-firm or firm textured, made from cow's milk and produced in the mountains or highland regions of France and Switzerland. Dairy farming is one of the oldest food production practices, and highland regions are particularly famous for making good cheeses where pasture contains fresh green grasses and wildflowers, particularly during spring and summer.


These cheeses are often made into large wheels or cylinders (preserved for the cold winter), and some are massive. Swiss Emmental wheels can be 6-10 inches thick, 44 inches in diameter and weigh over 120 pounds! These cheeses are also cured and aged for a long time -- normally 3 months to over 12 months. They are traditionally made with raw milk, which has not been homogenized or cooked/pasteurized by high heat (meaning less shelf-life for the retailers). That is why they are so tasty!

Those who like firm Cheddar cheese textures may discover a new favorite among these European classics.  They also melt well, and Gruyere and Emmental are important in traditional Swiss Fondue. Cantal and Comete are good with baked potato or gratin dishes and hearty soups. 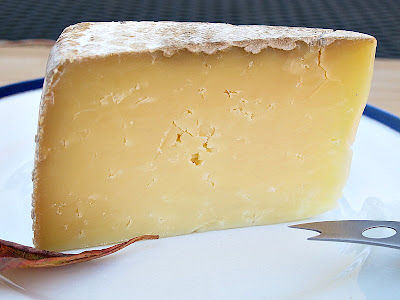 This oldest of the French cheeses dates back to Roman times. The cheese is shaped like a cylinder, one foot in diameter and about 20 lbs. The two types of Cantal are Cantal fermier (farmhouse cheese using raw milk) and Cantal laitier (a mass-produced version). Recently, Cantal has appealed to more and more cheese lovers because of its natural, rustic, tangy flavor that isn't too sharp, just creamy and mild. It comes from Auvergne, a region known for its fertile pasture lands. The well-ripened Cantal has a bolder, more vigorous taste, while the younger versions are sweeter and more creamy.

The Cantal in the picture was purchased at Whole Foods Market for $16.99 a pound. 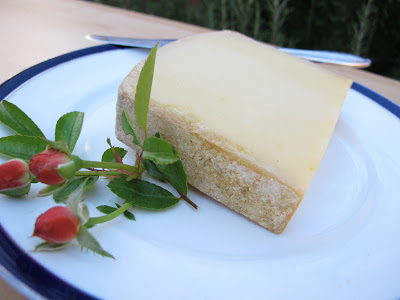 Comté (France)
Comté (also called Gruyere de Comté) is a cooked, pressed cow's milk cheese produced in the Jura mountains in the east of France. It has the largest production of any AOC (Appellation d'Origine Controlée) cheese in France (just like AOC wine, but for specific cow’s milk, because areas of production are regulated). More than 50,000 tons of Comté are made each year. The depth of flavor experienced when you bite into a piece of Comté comes from the diversity of the milk sources (from cooperatives that buy milk from small farmers throughout the region).

Long ago, people of this mountainous region (as in Switzerland) were faced with the need to preserve food for the long winter. By pooling their resources (cow's milk), they could create cheese in large wheels that could be stored many months and feed a lot of people.The wheels still weigh about 80 pounds and require about 530 liters of milk (daily production of 30 cows). The long maturing period, called affinage, takes from 4 months to over 12 months, during which time the cheese is regularly cleaned and rubbed with salted water.

Comté cheese is firm-textured with a mellow, nutty flavor. It's great on its own or served with a dry white wine such as Sauvignon Blanc or a light red wine, and accompanied with nuts, dried fruits and a good rustic country bread. As with all cheese, it should be served at room temperature (you may need to bring it out from refrigerator at least a couple hours). 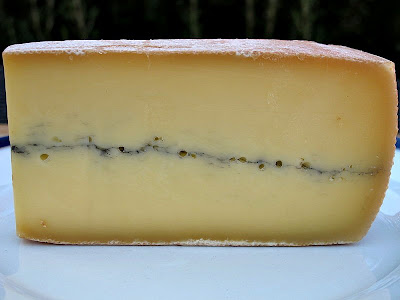 
Morbier is a semi-soft cow’s milk cheese from the Jura mountains. It is named after the small village Morbier (Swiss border) in France's Comté region. This uncooked cheese is pressed, ripened for two months and then brushed with salty water. It is easy to recognize by the dark stripe of ash separating it horizontally in the middle of the paste. The aroma is pungent and a bit strong, but the flavor is rich, sweet and a little nutty.

Morbier cheese dates back more than two centuries. Producers of Comté wanted to make a smaller cheese for their own consumption with leftover milk from making Comté. Each night, soot/ash was sprinkled on the fresh curd that remained at the bottom of the barrel to prevent a rind from forming and keep insects away. The next day, another leftover piece of cheese was put on top to complete the Morbier.
Try this cheese either straight or melted, served with a mild bread, nut and fruits . It will make all cheese lovers very happy! Recommended wines: Sauvignon Blanc, white wine from Jura and light red wine.

I purchased the cheese in the picture above at Whole Foods Market for $13.99/lb.