California Wild Salmon is in Season 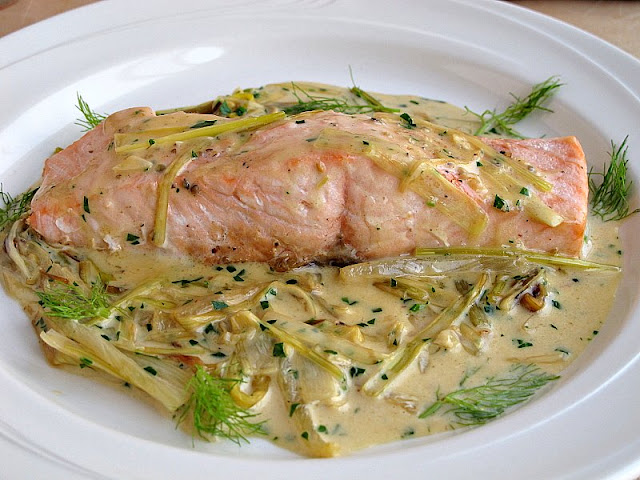 It has been much cooler here this week -- more than 10 degrees lower than previous weeks, because marine air is coming into the Bay Area from the Pacific Ocean (west to east), we call it “on shore” breezes, aka fog. When hot inland air blows from east to west toward the ocean it’s called “off shore” breezes, which cause warmer weather. The Bay Area is known for its micro climates, where the coastal areas, including San Francisco, are always cooler in summer than the surrounding inland areas. Where I live, about 30 miles to the south of San Francisco, it’s normally 10° F warmer;  in the East Bay, 15+ miles east of the City, and in Marin, 20+ miles north, it’s often 15-20° F warmer (or more). This is the Bay Area’s typical summer weather pattern, when San Francisco is covered in its famous fog for most of the morning and evening. When I was living in the City (for 10 years), I would visit friends in warmer areas outside of the city almost every weekend – anywhere  to the south, east and north – to get tan. When returning to San Francisco in the evening, I got hit with the cool ocean fog, which covers the entire City. Fog is misty and mysterious – it calms down everything, including sunburned skin. It covers the hills and even the moon.  It ‘s cold but romantic. 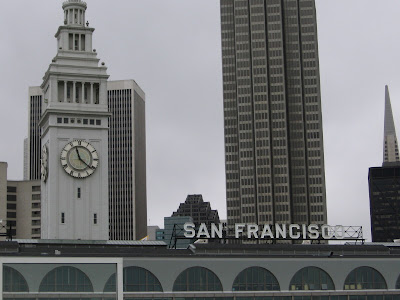 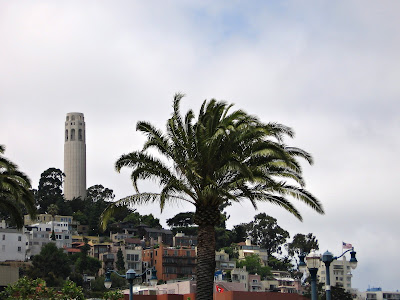 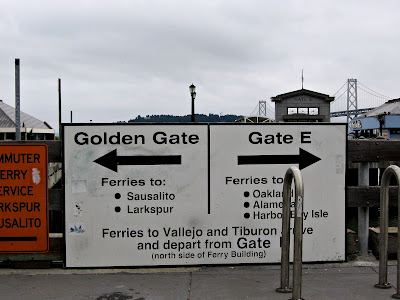 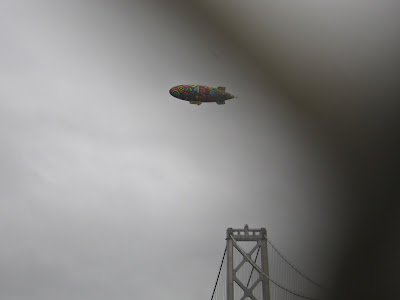 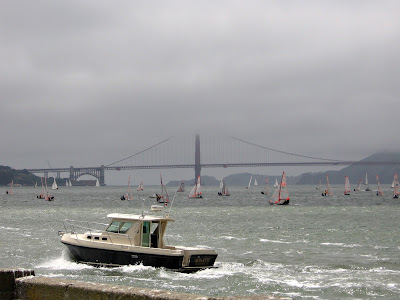 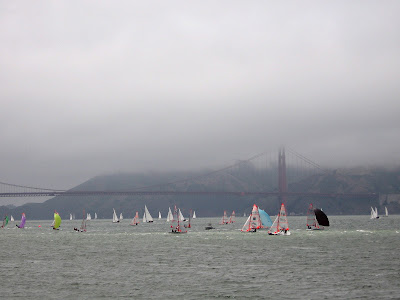 Summer is also wild salmon season in California (from April to November), for both recreational /sport and commercial fishing. For the last 2 years, salmon fishing was banned completely by California Fish and Game to protect declining fish populations (coho salmon fishing is still prohibited). Instead, we had to eat fatty farm-raised salmon or the normally-frozen Alaskan dark red sockeye salmon. However local salmon, popularly called king salmon (Chinook), which you can fish just outside of San Francisco Bay, is fantastic. King salmon is very delicious and grows quite big ... to 40-50 pounds or more.  I went salmon fishing more than a few times, even though I am not a big fan of fishing, and it was not much fun. Why?

1) It is not easy to catch the fish, and the maximum catch is only two per person (although two are often enough to feed more than a dozen people easily).

2) You have to spend more than half a day on the boat on rough ocean, and most people get sea sick even before the boat reaches the fishing spot. I have seen many people miserably sick, their whole day ruined when they were expecting to have a wonderful time. It is not like going fishing for trout at a warm inland pond or lake. A super-fresh catch is great nonetheless. The fisherman helps you to clean the fish (scales and gut are removed as soon as a fish is brought onto the boat). I am not crazy about fishing, but tasting truly fresh fish is incredible. On one occasion I filleted the fish immediately, then sliced it up thin and cured it with salt and sugar, put crushed white peppercorn and fresh dill sprigs on top, then drizzled with lemon juice and waited about 15 minutes (this action is all on the boat on choppy water). Instant “Gravlax”! We served it on sliced baguette with honey mustard mayonnaise and fresh dill leaves on the top as canapés… with chilled white wine, of course. It was heaven. On another occasion, for a sandwich, I simply sautéed the fish with butter, salt and ground white pepper, and enveloped it in bread with fresh dill and butter lettuce (also on the boat). I felt like I became a fisherman when I saw how everyone loved it. Even friends who got bad seasickness enjoyed the experience after a glass of wine and my food. I don’t think I will be able to be a fisherman, but I don’t mind cooking on a boat. I have experience! 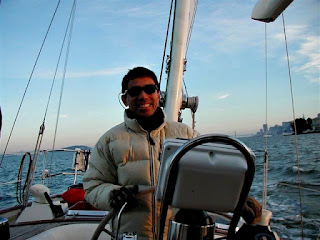 How I cook salmon at home:  grilled, broiled, steamed, or sautéed with butter and finished with a little white wine and cognac to flambé. When grilling salmon, I sometimes sprinkle some brown sugar in addition to salt and pepper as seasoning. The brown sugar caramelizes on the fish, making it taste richer and look more attractive.

For steaming, place the fish on a bed of julienned vegetables such as leek, fennel, scallion, etc. in a shallow baking dish or dinner soup bowl. Season with salt and freshly ground white or chili pepper, one or two tablespoons white wine and a few slices of lemon on top of the fish. Place it in a hot steamer with a cover and cook about 7-8 minutes. I like to serve it with a sauce of half soy sauce half lemon juice, or cilantro/green chili puree, or basil/Italian parsley pesto, etc. For me, there will also be a bowl of freshly cooked rice, always. 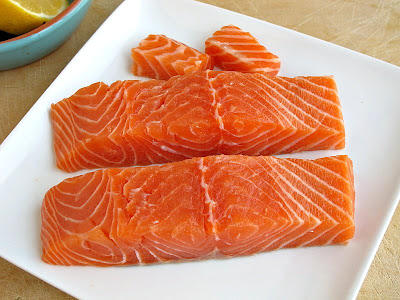 Season lightly both side of the salmon with salt and pepper

Melt the butter with olive oil in a skillet or sauté pan over medium heat. Add the fennel and leek. Cook, stirring, until soft (about 2 minutes) then add the garlic, stirring, until fragrant, about 30 seconds.

Add the wine and bring to boil, then place the salmon in the pan. Reduce the heat, cover and simmer about 6-7 minutes (do not overcook; the center of salmon should be pink and moist).

Transfer the salmon to plates and keep warm. Add the cream to the pan, increase the heat and boil the sauce until thick... about 1 minute. Swirl in the lemon juice and tarragon if using. Adjust salt and pepper for the sauce. Pour the sauce over the salmon. 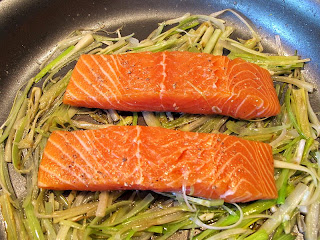 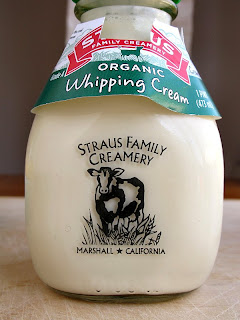 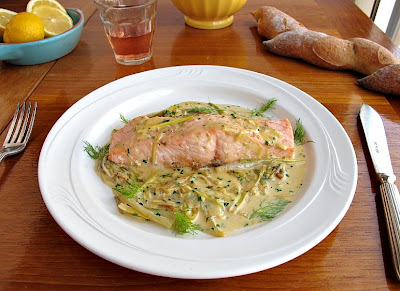 Kitchen note: I use white pepper for all seafood and chicken breasts. White pepper is milder, less spicy than black, plus it will look better on the food (I don’t like black pepper spots on the white flesh or white sauce). If you do not like white pepper, you may substitute with a small amount of chili powder.

Good salt is very important for the final result of a dish. I do not use the white sand-like salt that comes in the round blue package. The same brand now sells kosher salt, but it isn't very good. It has a sweet, strange chemical taste, unlike the Diamond Crystal brand I normally use. I have a dozen different kinds of salt in my kitchen. For general purpose cooking, I use kosher salt; for Japanese cooking, I use Japanese sea salt (not too salty; I have several different varieties); for grilled/broiled meat I prefer gray sea salt from Ile de Ré of France’s Atlantic marshes, which makes grilled meat very delicious. You can taste the difference.

What is the Difference between Wild and Farmed Salmon?

Without additives, the flesh of farm-raised salmon would not have the familiar deep pink color, but would be gray.

“Atlantic” salmon is synonymous with farmed salmon. Despite its country of origin -- Norway, Chile, or Canada, for example -- Atlantic salmon are nearly extinct in the United States and Canada and are unavailable commercially. In Alaska, wild salmon are abundant and farming is currently illegal. Therefore, “from Alaska” or “Alaskan” always means wild. If the salmon is not labeled “wild” or “Alaskan” or “Local” it is probably farmed (currently over 90% of salmon in consumer markets in the U.S. is farmed, and we can get it all year round).

If it is fresh during the winter, it’s also probably farmed. Most wild salmon are harvested and available fresh only during the spring, summer, and fall (May through September). Wild salmon available during the winter is either fresh-frozen, canned, or smoked.
If there are white lines of fat running through the flesh, it is most likely farmed. Farmed salmon spend their lives in small, densely crowded pens where they are hand-fed a pellet diet. A wild salmon migrates thousands of miles through the open ocean, hunting its food and avoiding predators. This makes wild fish relatively leaner, with less visible fat.

Note: Most white flesh fish Tilapia, Catfish, Trout and Tiger prawn in ordinary markets are farmed.
Do you know salmon is cheaper than it was 20 years ago? It’s because most of them are farmed (mass-produced, just like chicken). “Fish farmers” have been working on genetically engineering  salmon, and have succeeding in raising bigger and fatter fish in a short amount of time (Atlantic salmon grow more slowly during the winter, but engineered salmon, “souped-up” with modified growth-hormone genes from other fish, reach market size in about half the normal time).

In my experience, farmed salmon are so oily and smelly that you need bleach to get rid of the smell from the cutting board after cleaning/cutting the fish. They also produce a lot of smoke when you grill, bake or broil them. Now you know why. 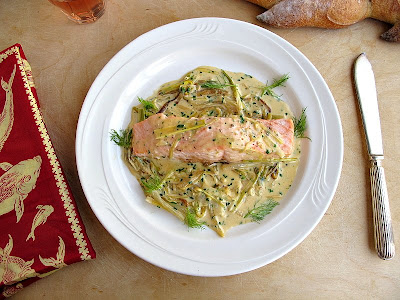