Salad of Red and Golden Beets 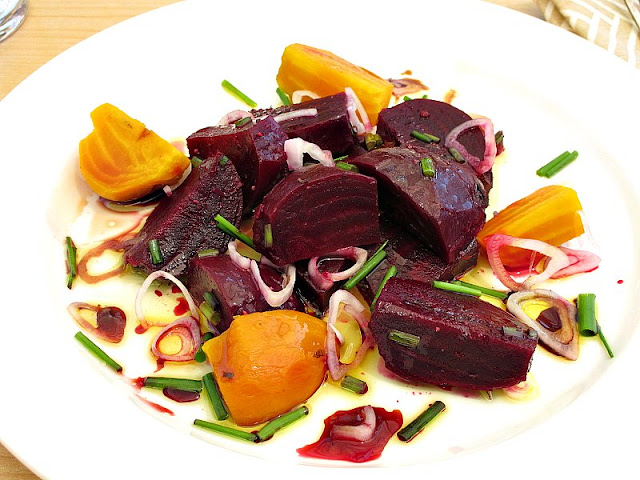 When I first tasted beets (at a college cafeteria), I thought they were terrible. I didn't taste anything but a strange sweetness and texture.  A few years later, I became a prep cook at a now-famous French-California cuisine restaurant in Berkeley where the menu changed daily. One spring day I had to bake and clean a couple cases of red and golden beets for a composed salad. I still remember my hands being completely stained red when it was done. However, the chef prepared them seasoned with red wine vinegar, salt, pepper and extra-virgin olive oil, then garnished with orange slices and zest. It was very simple, but attractive and delicious... and I re-discovered beets. It was such a different taste and texture from the beets at the college cafeteria, which typically served vegetables from a can.

Every so often I still see those canned beets at salad bars at corporate or college cafeterias. Some things never change. I don't make beet salad so often at home, but when I saw these beautiful beets at the farmers market last weekend, I wanted to make it at home. 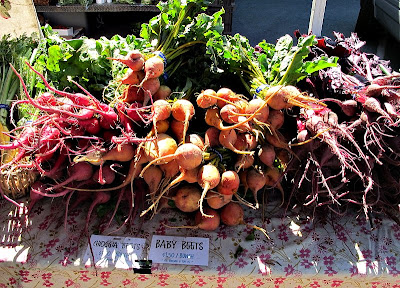 If you want to make it the Chez Panisse way (optional):
1/2 cup shelled walnuts, roasted a few minutes in the oven
2 blood oranges: With a sharp knife, trim off the top and bottom of each orange and pare off the the rest of the peel, making sure to remove all of the pith. Slice the oranges into 1/4 inch rounds.
2 tablespoons orange juice
zest of 1/2 orange
serve with garden lettuce or Belgian endive

Preheat the oven  to 400 F. Trim and wash the beets, place them in a baking pan with a splash of water, cover tightly with foil and roast about 40-45 minutes until they can be easily pieced through with a sharp knife. When beets are cool enough to handle, peel them and slice or cut into wedges. Place them in separate bowls (the red beet will color the other beets otherwise). Season both bowls of beets with the vinegar, salt, pepper and the olive oil, and the orange juice and zest if you are using. Arrange the beets on plates and garnish with the shallots and chives, like I did in the photo, or serve on a bed of garden lettuce or Belgian endive. Garnish with the roasted walnuts. 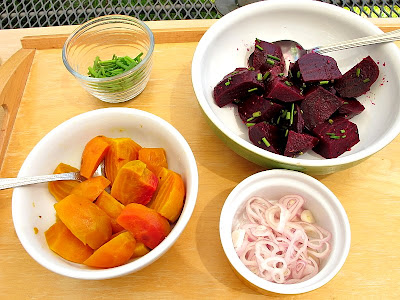 Tip: It is best to toss the beets with vinegar first and marinate for 5 minutes before adding the olive oil. 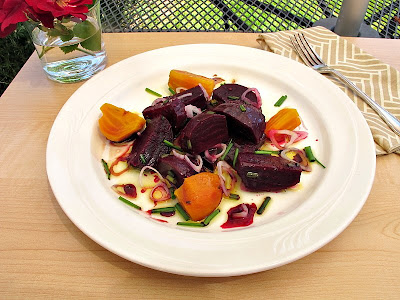 You may also serve this beet salad with some fresh goat cheese or feta cheese. 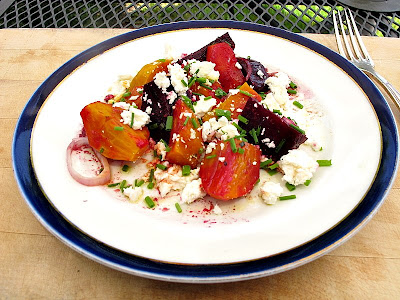